Our ranking of the best multimedia boxes remains unchanged from last month and the Apple TV 4K remains at the top of our podium. The Nvidia Shield TV Pro, which recently entered our selection, is a solid alternative, especially if you prefer the Android universe to that of tvOS.

While most Internet boxes act as multimedia players, not all users necessarily subscribe to a fixed Internet package including television. And it is in this case of use that a multimedia box fits in, allowing you to stream and view all kinds of content on your TV using a simple Wi-Fi or Ethernet connection. Between popular brands and Chinese “no name” products, the choice is not obvious, so we have selected 4 solutions which we believe tick all the boxes according to different uses and budgets.

With the Apple TV 4K, it will cost an average of € 200 to get the box. The price of peace of mind because the Apple TV 4K is, in our opinion, the best for managing video content in general and 4K in particular. Thanks to the possibility of connecting to Ethernet, the device operates at optimal speed, useful for very high definitions. In Wi-Fi, no particular worries either with AC MiMo and the promise of a speed of 1.2 Gb / s.

The remote control provided by Apple is still intuitive and offers 6 buttons to adjust the volume, navigate from one menu to another, pause and play media. To top it off, a button simplifies the launch of Siri, to make requests and control the box with your voice. Remember that the Apple TV is HDMI CEC compatible, its remote control can therefore take control of your TV, amplifier … And if the Apple remote control is not suitable, the use of a universal Bluetooth remote control remains possible. 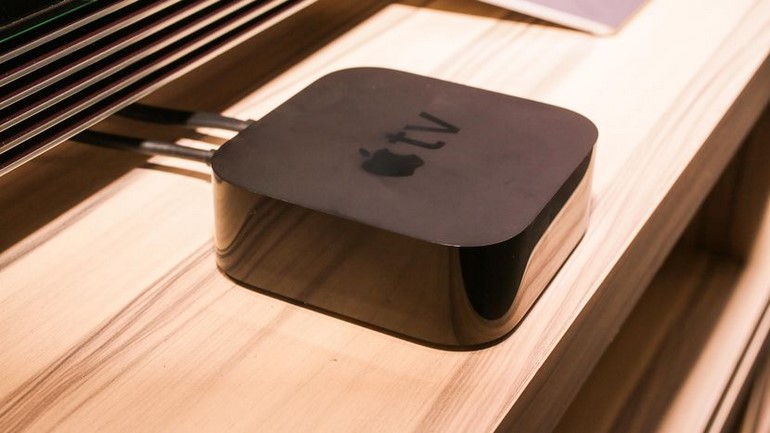 On the interface side, iOS enthusiasts will love the clean and intuitive side dear to the brand. For example, the “TV” application, which has no equivalent on the market and brings together all the video content from the various SVoD platforms to make it easier to navigate. In the same space, you can access Netflix, MyCanal, Molotov videos or content saved on iCloud in a few seconds. If your budget allows it, the Apple TV 4K remains the benchmark in the market in our opinion.

Since 2015 and the addition of an app kiosk and an intuitive touchscreen remote control, the Apple TV has matured. If the French market supplied by box operators still limited the appeal of Apple’s TV box, this 5th generation intends to rely on 4K HDR and its muscular configuration to seduce.

Next to the Apple TV 4K, but running Android TV this time, the Nvidia Shield TV Pro 2019 is the most versatile box in our selection and the best performing Android box on the market. The Android TV interface has never been so fluid, and for good reason: this player works with a Tegra X1 + processor supported by 3 GB of RAM. Enough power to watch 4K HDR at 60 frames per second, play gourmet 3D games and of course take advantage of the in-house cloud gaming platform, GeForce Now. The Shield Pro is the ultimate case for (cloud) gaming. The Shield Pro also presents the best video quality available on an Android box thanks to a 4K upscaling technology based on artificial intelligence, (rather effective on Full HD 1080p, a little less on 480p), 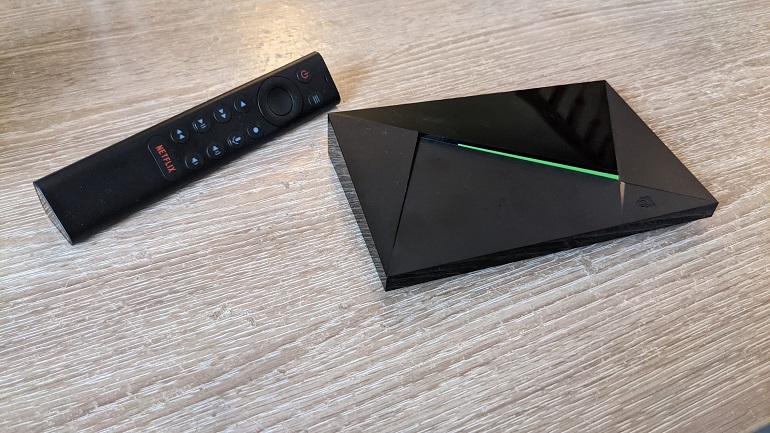 The new remote has more buttons, one of which is programmable, and a really welcome backlight. HDMI-CEC compatible, it can work with other compatible devices such as a universal remote control.

Released in 2019, the Nvidia Shield TV Pro remains the most powerful Android box on the market. She ticks almost all the boxes (4K 60p, HDR, Atmos … 4K upscaling). The technologies and codecs supported are numerous, even if some are missing and it is a very good cloud gaming machine. Qualities that pay off … A box to recommend to those who want to enjoy both a good TV box and the GeForce Now service.

3 – Google Chromecast: the best Android box, at the best price

Google has greatly improved its streaming stick, which now looks more like an Android box. The new Google TV OS is a good follow-up to Android TV and should improve further in the future, the device embeds all the most modern image and sound technologies (4K at 60 frames per second, Dolby Atmos , Dolby Vision, HDR10 or HDR10 +) and its remote control is very well thought out. In addition, the Google Assistant is well integrated, the device integrates seamlessly with other Google services, like Photos, and support for major streaming apps will more than cover all your needs. 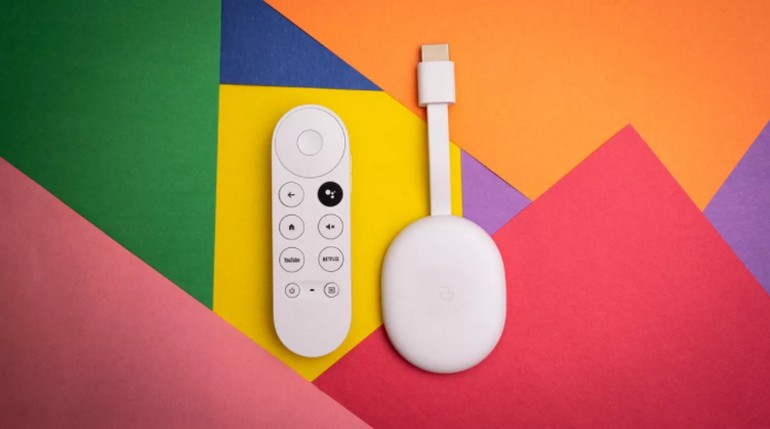 We only regret the absence of a USB port or MicroSD card to connect an external storage (the internal memory of the key is limited to 8 GB). Despite this, the new Chromecast is an excellent choice for those who want to make their old TV smart or improve their “smart” functions (some TVs like those from Panasonic would need it), or even for those who have a projector with little or no power. everything connected. Compact, very discreet and accessible to all budgets, the Google Chromecast version 2020 is worth less than 70 €, a sum amply justified in our opinion.

Google’s new Chromecast now includes Google TV. An interface that brings together in one place the streaming services and Android multimedia applications that we are used to using. It comes with a remote control to control the device by hand or by voice, but also the rest of your connected home. No need for Chromecast Ultra either to broadcast in 4K, a very complete little streaming stick, therefore, looking like a TV box, which manages to rank among the best products in its category.

Equally compact, discreet, transparent in terms of use and economical to purchase, the Amazon Fire Stick 4K offers more or less the same possibilities as Google’s Chromecast, for a significantly lower price. In addition to the € 20 difference between the Chromecast and the Fire TV Stick 4K, it will above all be the choice of the product and software ecosystem that will determine your choice between the Amazon and Google solution. If you already have a Google Home or Nest Home, you’ll probably be going on a Chromecast. Conversely, if you have already invited Alexa to the house, it will be the Fire TV Stick that will collect your votes.

The display quality of the images produced by the Fire TV Stick is convincing, we also appreciate the support for HDR10 + and Dolby Vision for compatible televisions, without forgetting either, for those lucky enough to have a system complete or a sound bar, from Dolby Atmos. With a Quad Core processor clocked at 1.7 GHz, no latency to raise on streaming. It is less famous on video games, where the quad-core does not work miracles. The remote control is not particularly suitable for this use either. In the absence of a micro SD card slot, it is also necessary to be satisfied with the 8 GB of internal memory (the actual capacity is less). 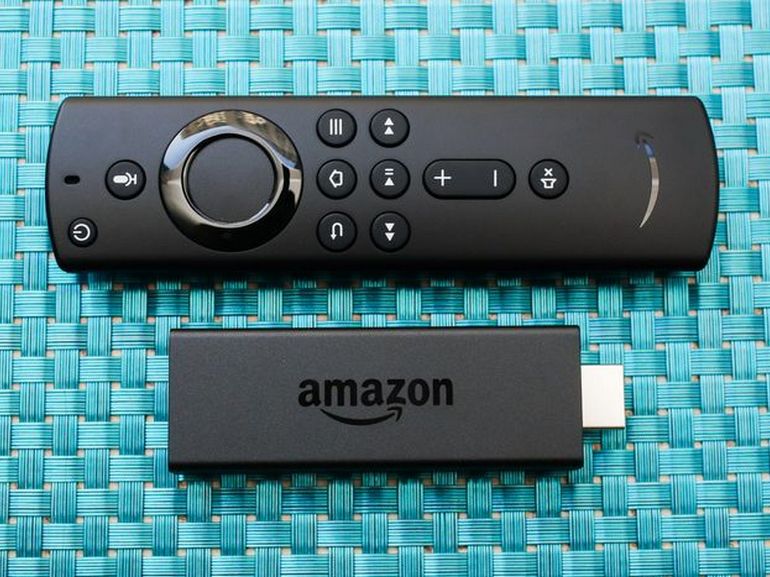 On the other hand, it is very efficient for reading content, it can control the volume and power on televisions and voice recognition, via Alexa and the built-in microphone, works very well. If you are looking for a simple and inexpensive way to watch your Netflix, Amazon Prime Video, Disney +, MyCanal, YouTube, Molotov videos on your TV, the Fire TV Stick proposition is very attractive, even if Amazon tends to saturate it. its audio / video player with its own content and those of its partners.

The Fire TV Stick 4K is a convincing connected box and offers an excellent price / performance ratio. The interface is pleasant, the navigation fluid and it is compatible with the 4K resolution which is generalized on most televisions. It also shines with its very affordable price, count around 60 euros (not to mention the many discounts that are often available). To exploit its full potential, however, you will have to choose to join the Amazon ecosystem with Alexa connected objects and the various services accessible via a Prime subscription.